You are here: Home › Samsung

I was asked by Samsung to give my insights on the evolving role of the CIO in the age of digital disruption. 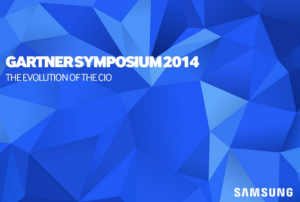 These insights have been included in a marketing piece which Samsung has released in relation to the key take aways for CIO’s coming out of this years Gartner Symposium in Barcelona.
Click here to read my insights. 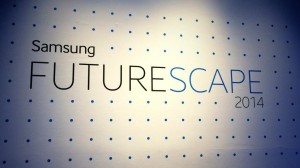 I had the pleasure of being asked to attend the Samsung ‘Future of Work’ event last week in London.

The event itself was a showcase of Samsung’s current and planned developments that they see entering the marketplace of the future.
They covered everything from wireless meeting rooms to how the worker of the future will split their work/life balance including the tools they may be using to achieve the optimal balance.
The work/life balance was an often covered theme and Samsung highlighted how their technologies and devices will enable the ‘working from anywhere’ theme but with the power of and capability of technology you would normally expect when working in an office.

The Future of Work whitepaper that was discussed at the event was created in partnership with Ovum Analysts.
It highlighted the ever-shortening bridge between personal and workplace technology preferences, with applications taking force in the world of work and up to 78% of people using their own devices for work.
Samsung’s own Business Enterprise operation research details key opportunities for employers as smartphone penetration reaches 75% of the market, and the worker-consumer relationship blurs. END_OF_DOCUMENT_TOKEN_TO_BE_REPLACED 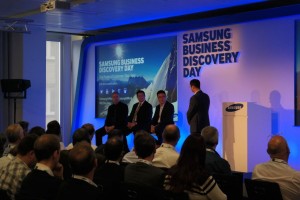 That’s me on the far left stool

I was delighted to be asked by Samsung to speak on a panel at their initial Samsung Business Discovery Day in St Paul’s last week – www.samsungbusinessdiscovery.com for event info and #BizDiscovery on Twitter for some soundbites from me on the panel.
You can also click here to see the full panel session on YouTube.

The panel discussed how mobile technologies are changing the role of the CIO and how the CIO can empower the business through their use.
It was a lively, stimulating and fun discussion which included a good number of live questions from the floor.

The official detail of the event was as follows:

We are entering a new paradigm of technology in business.  The rapid adoption of consumer technology can truly liberate our most precious resources – our people – and free them to spend more time with customers and consumers.  In every sector, companies are discovering that mobile technology presents new opportunities for customer discovery – transforming service, support and ultimately improving sales.

At the Samsung Business Discovery Day we will hear how companies are putting mobile technology at the centre of their technology strategy.  Leveraging new platforms based on consumer technology to add more speed and flexibility to current business operations.  We will explore these new paradigms, share implementation experiences and generate dialogue and debate to help your organisation leverage the power of customer discovery in your business.

We believe that innovators in the technology or IT departments should be driving a new agenda – building business platforms that are mobile first and built on consumer technology.  In this mobile first world – businesses can accelerate the adoption of technology and ensure that their employees spend more time working for and on behalf of their customers.  It sparks new debate, a fresh look at the consumerisation and BYOD trends – addressing matters like enterprise security from a people centric view – allowing your employees to embrace new technology. 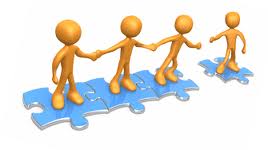 In recent months I have noticed a distinctive trend emerging whereby CIO’s are switching from larger, well-known suppliers to smaller vendors who are leaner and more agile.
This has been backed up by the feedback in the sessions and the CIO’s who I have spoken with here this week in Barcelona at the Gartner Symposium IT Expo.

This is an interesting and positive trend as it allows the market to thrive with more up and coming vendors allowed to pitch for and win contracts by showing real innovation and enthusiasm to get the job done where they may have previously been frozen out at the RFP stages.

Gartner themselves stated in their keynote session that their recent CIO survey showed that the majority of CIO’s will change their primary suppliers by 2017.
Could new entrants like Samsung muscle their way on to your list of primary suppliers? Their launch this week in to the B2B market makes them a credible player.

What does this mean for established suppliers? Basically it means they need to be less complacent and engage better with their clients and not just around the times of contract renewal.
It shouldn’t mean they try to shortcut this process and just go out and buy a crop of these bright young new vendors, far from it. They would be better served in studying why they are winning business away from them and looking to instil that hunger and innovation back in to their product offerings and services.
I know they will say that due their size and complexity of contracts etc. this will be difficult but innovation and enthusiasm are contagious and adding those to anything at any level will only give everyone a boost.

I have even heard of some companies looking in to gamification techniques and the use of game thinking and game mechanics in non-game contexts to engage people in solving problems.
This may be a bit bleeding edge for some but it really highlights what digital and its associated disruption is bringing to the market with the amount of new technology and value added services it offers.

With the introduction of digital and other disruptive technologies, CIO’s are now faced with more requests from the business to leverage technology than ever before, often wanting to do it themselves within their own business units.
The smaller, leaner and more agile vendors are able to seize upon this and bring to the market services and solutions which you can get up and running in less than half the time your previous vendors take to do something along with significantly faster versioning and the addition of new features.

It’s an interesting marketplace and never before have I seen such a seismic shift in the way that organisations are being disrupted.
The better-organised organisations that are more agile and quicker to adopt will thrive in this new world and so they should. 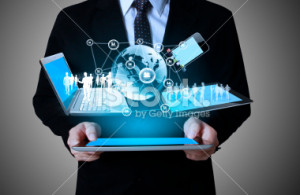 This is my first piece for Samsung Business and is published here on the Samsung at Work site.

There are always many theories on the position of the CIO role, from the CIO role is dying through to should they be renamed the Chief Innovation Officer. The truth is that many still do not understand the CIO role and its place within the organisation. Many CEO’s and CFO’s still find it hard to understand IT and just see it as a money laundering operation rather than something that can add real value to the bottom line. It’s really up to CIO’s to stand up and be counted and show not only what they can bring to the table but prove they can be strategic, customer facing and deliver both innovation and revenue whilst making sure the technology still operates.

There is no doubt the CIO role has and is evolving constantly but that is true to say of all c-suite positions who want to stay relevant and ahead of the game.

As technology moves at such a pace, so must the CIO understand and work out the best way(s) to leverage it to add best value to their organisation.
Technology has seeped more in to our everyday lives and as a result the roles that manage it must adapt to become more innovative and constructive in the ways they use it.
Gone are the days of just making sure the equipment is in working order and the datacentre is operational – CIO’s are now measured on what they deliver to the bottom line and rightly so.
If you want a seat in the boardroom, you have to earn it and work very hard to keep it.

As the CIO role evolves it naturally starts to touch a lot of other technology areas such as digital and mobile.
This is where people are now saying they enter the CIO v CMO battleground with the victor seemingly the one who owns the digital space and ultimately the technology piece.
Politics aside, what’s to stop both working together? A quality CIO and CMO alliance would be a really formidable force in terms of delivering innovative and strategic solutions built around the needs of the customer.
Many companies are struggling with this ‘middle ground’ and anointing a new role, the Chief Digital Officer (CDO).
Does this only add more mud to the water of who owns what or is this another career path for marketing savvy CIO’s or tech savvy CMO’s?

What I do know is that if you add tangible value, deliver your strategic objectives, beat your KPI’s and deliver innovative solutions, you can choose your own job title and sit wherever you want in the boardroom.

I’m delighted to have been asked by Samsung Business to work with them at the Gartner Symposium IT Expo 2013 in Barcelona next week.

I will be capturing the event and creating a body of high quality content through live blogging and comment, insight and analysis articles published through this blog and my social channels.